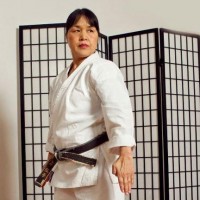 When she is not practicing karate, Hiroko teaches Japanese at a community college in Redding. 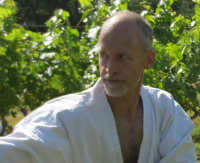 Brad Marsh started practice at the Redding dojo in April of 2000. He was promoted to Yodan (4th degree black belt) under Hiroko Mori’s instruction in 2016. Brad first trained in Okinawan Shorinji-ryu in Cupertino, California and attained Nidan (2nd degree black belt) in 1988.

When he is not practicing karate, Brad pursues a Primal lifestyle, enjoying time with his dogs and working on his Jeeps. He is also gainfully employed as an Information Technologist at a college textbook publisher in Redding.